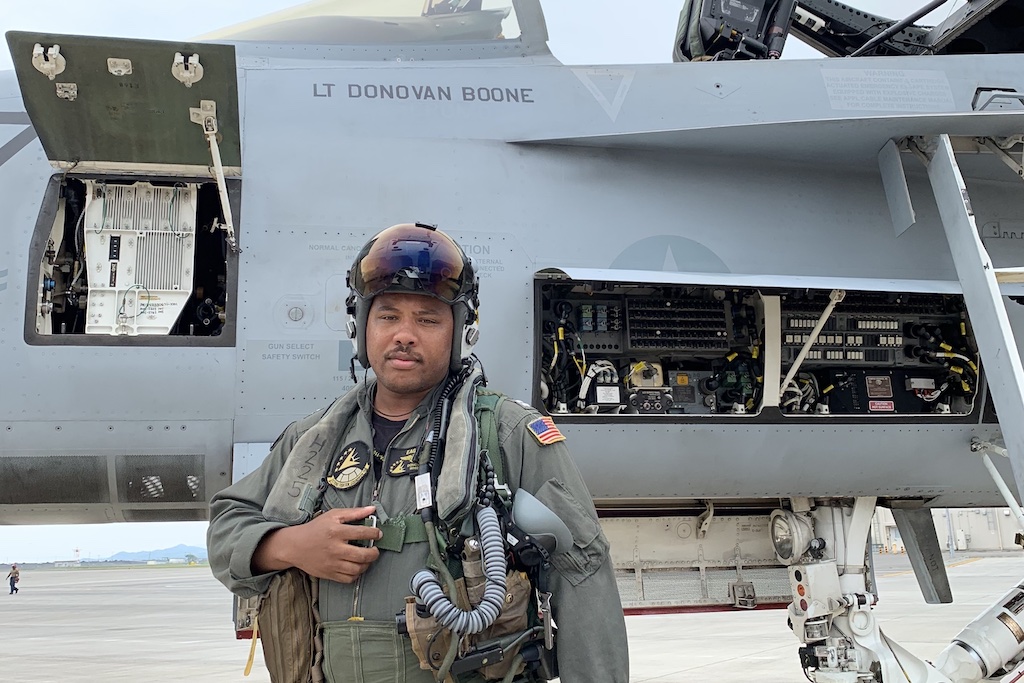 As a youngster, Donovan Boone eagerly anticipated visits to his grandmother’s apartment building in Brooklyn.

From her balcony in the structure that towered more than 15 stories, Boone had the perfect vantage point to watch aircraft arrive and depart John F. Kennedy Airport just one borough over in Queens.

“I lived in Brownsville, Brooklyn, but I had a grandmother who lived in East New York in Starrett City, which is now called Spring Creek Towers, said Boone, 29, an F-18 Super Hornet flight instructor. “She lived on the 20th floor which overlooked Jamaica Bay. There’s a bunch of channels, and you could see the planes flying into JFK airport.”

According to Boone, much of his time during those visits consisted of watching planes enter and disappear from the flight path. Naturally, he had questions. Where are they coming from? Where are they going?

“(I thought) that would be pretty dope to fly one of those types of planes and just get away,” Boone said. “That drew me into aviation from the start, but you never heard anybody – especially around that area – say, ‘Oh, I’m a pilot.’”

Those trips to his grandmother’s house slowed as Boone became older, and he eventually left New York during his high school years when his family relocated to California.

Boone attended a STEM-centered high school in Southern California and enrolled in Atlanta’s Morehouse College as an economics major upon his 2009 graduation from high school.

While at Morehouse, Boone joined the school’s ROTC program.

In 2010, Boone’s ROTC summer internship-type program allowed him to finally become acquainted with airplanes and ultimately set his career as a Navy pilot in motion.

The experience included learning to fly, which Boone and his classmates practiced for a couple of months in a Cessna or Piper small aircraft. Boone said the aviation pre-flight indoctrination program also consisted of four weeks of “tests and class.”

After more than a year in Pensacola, Boone headed to Milton, Florida, to train in the single-engine T-6 Texan aircraft. While there, he spent another year learning more of the intricacies of flying.

“It’s still a prop plane, but it’s a little more acrobatic,” Boone said of the T-6. “You can do more maneuvers, but you’re still kind of getting your feet in the water at that point, traveling a little longer distances, talking to more people, just learning how to navigate in the airplane, and maybe spinning it around every now and then. The baseline of that aircraft is learning how to work with other people, learning where you’re supposed to go, fly in formation with other planes – things of that nature.”

During Boone’s stay in Milton, he learned he was selected to fly jets. The opportunity took him to Naval Air Station Meridian in Mississippi, where he trained on the T-45, a jet.

With every step, the aircraft and training became more advanced.

In 2016, Boone arrived at Virginia Beach – the place he currently calls home – where he became acquainted with and learned to fly the F-18 Super Hornet for the first time, along with learning how to work radar, learning how to deploy weapons and how to navigate the aircraft’s systems.

“It was amazing,” Boone said of his introduction to the F-18. “The first flight you ever do, the person in the back (seat) has a stick in the back as well to help you out if you need it, and then your very next flight after you don’t know what happened, blacked out for a little bit and came back and landed, you just have the stick by yourself.”

These days, Boone is tasked with training naval aviators in the F-18 Super Hornet.

Years have passed since he sat on his grandmother’s balcony and watched the air traffic from JFK. He’s grown from a youngster with aviation dreams to someone who now helps others achieve theirs through his role as a flight instructor.

Boone’s passion for aviation and for the place he calls home hasn’t waned over time. It remains the same, and it fuels him every step along the way.

“As my previous skipper used to say, ‘Stay humble and hustle hard,’” Boone said. “I never forgot where I came from, and I kind of pride myself on that. If anybody ever asks me, I am from Brooklyn. I’m not scared to say it. I’m not scared to admit that it’s where I’m from. I use that to let people know that you can follow your dreams. Never give up on it. I never thought, even up until college, that this was possible. It’s a blessing.”

Elton Hayes is an award-winning journalist who has long had an interest in aviation. He’s currently working to obtain his private pilot’s license. When he’s not working, he’s usually reading aviation-related articles or watching sports. 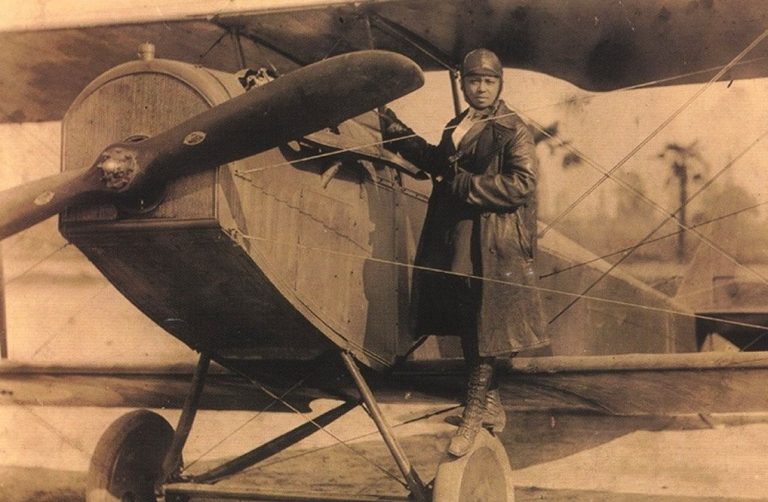 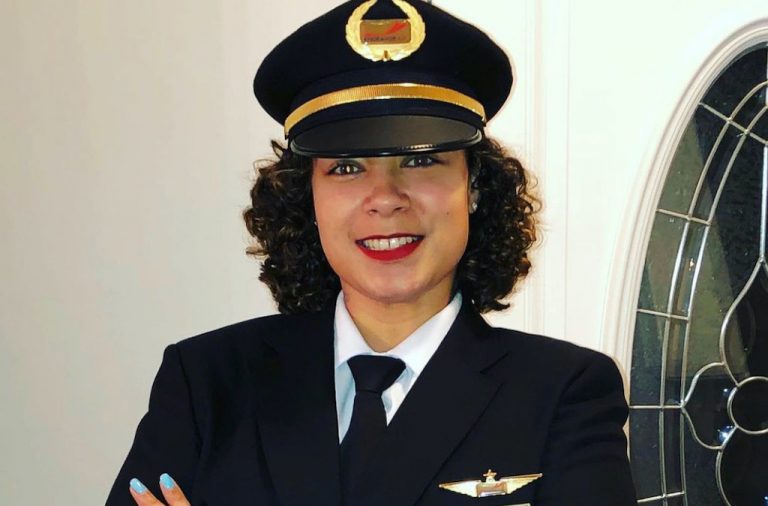 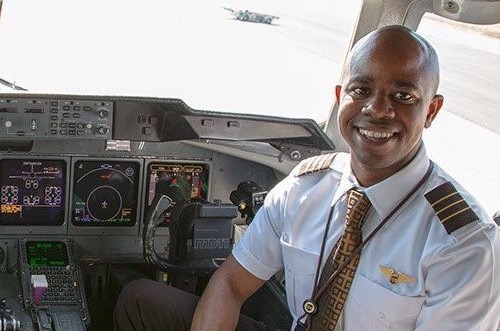 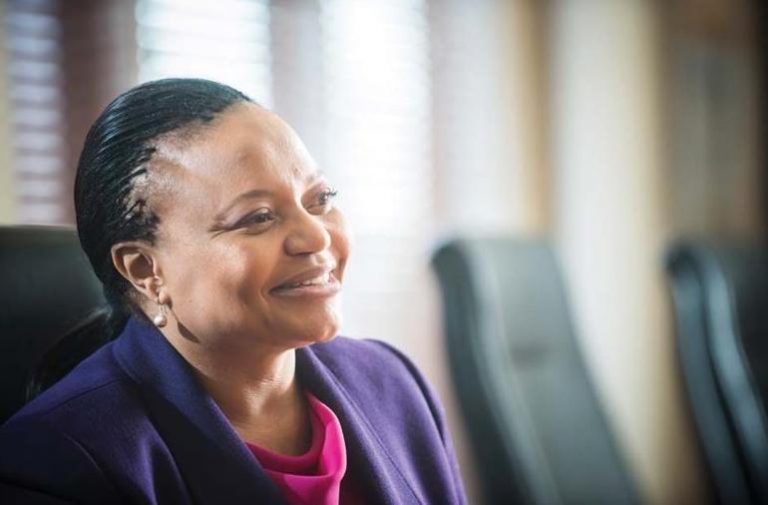 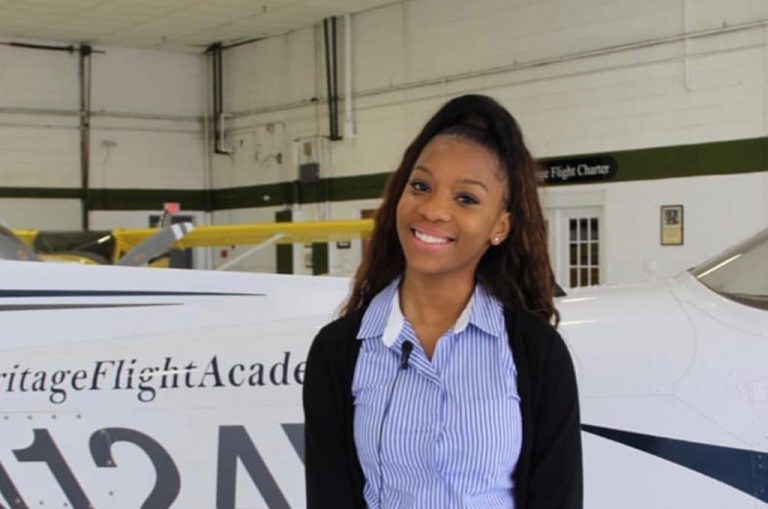